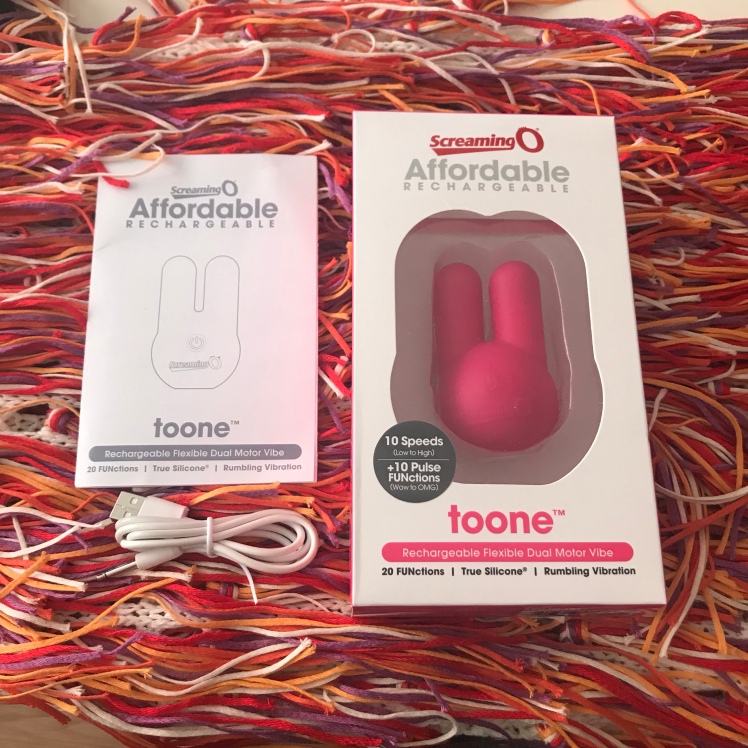 Peepshow Toys bestowed upon me the Screaming O Toone, I was absolutely excited for this opportunity a little more so than the rest because of a very specific feature this toy has. Toone features two pillars or “ears” that can stimulate under the same pattern OR each ear can be working on a different pattern. The thought of this is what really had me pining after this toy. Screaming O Toone is a rechargeable, body safe, and nonporous toy that is entirely waterproof. Toone offers it users a duel motor feature ensuring each “ear” can deliver totally powerful and equal levels of vibration. The ears themselves are firm and almost entirely static; the description of the toy suggests they are more flexible than they are. As for the silicone, sadly, I was a little bummed out by the texture, it was not that silky silicone many of the toys I personally handle are. The texture is hard to explain, because it is definitely not “rough” but rather like an eraser or the silicone on the grip of a pen. It had me suspicious so I gave this toy the “Flame Test”, for those who do not know a true medical grade/premium silicone toy will not burn or melt under the flame. The Screaming O “True Silicone” was in fact that. With that out of the way we can talk about how it performed functionally. 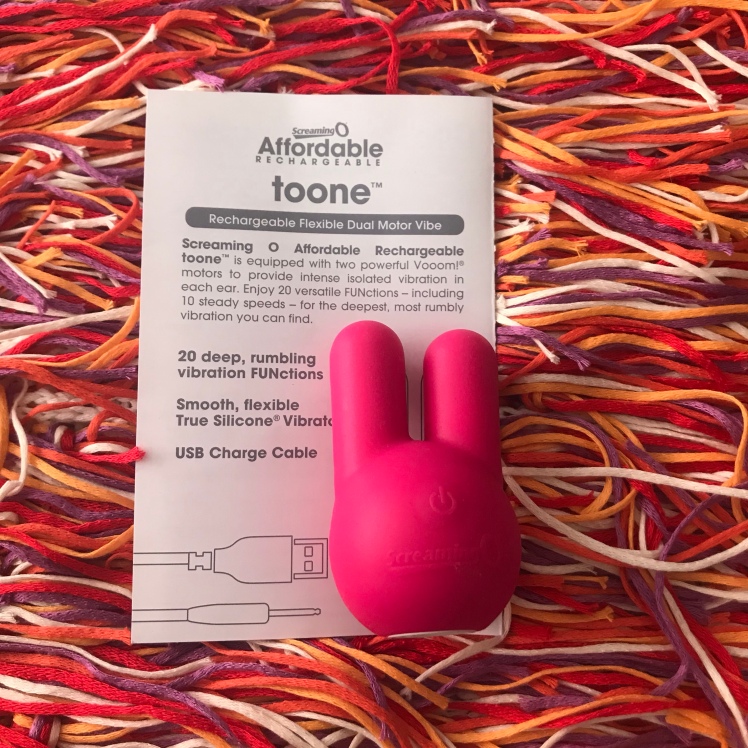 Functionally, this toy is simple, having only one button, but featuring twenty “FUNctions”. The user simply holds for on/off, then you are met with a steady rumbly vibration. This intensity can be increased through the first 9 settings before reaching the patterns feature, and to move through the patterns one must simply click quickly. I think a slight downer about this toy is the fact that the intensity can be continually raised but the intensity of the patterns are set. I am not typically a patterns fan, but as mentioned the variation between the “ears” was the feature I looked forward to the most. The patterns to follow 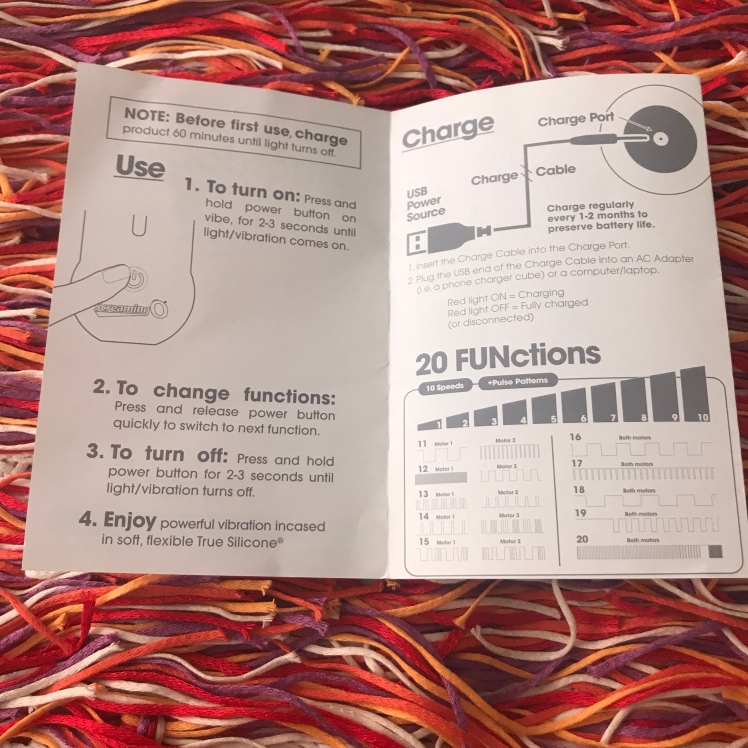 11. A rumbly ping-pong action between the ears

12. A massaging sensation from one ear while the other holds a steady vibration

14. A drumming rumble of a vibration, quick in pace

15. One ear carries a deeper vibration while the other is quick and light

After the fifteenth vibrations the patterns begin to work in tandem, of the vibrations above number fifteen really gives that sensation I was really expecting with this toy.

19. A less intense galloping, but with a slight jerking variation

20. Holds its own rhythmic vibration

After the twentieth pattern the toy shuts off, which is extremely frustrating when trying to explore or simply return to start.

When first starting to use this toy it took some getting used to. I tried hard to take note of the different features, patterns, and sensations this toy offered. Though the vibrations are rumbly, they are not as strong as I personally would like; I can begin playing with this toy, but I struggle to finish with it. Outside of the vibrations being a little underwhelming the shape still held potential. However, the static ears make it difficult, at least for me to really place around my clit. My desire was to utilize the ears in a pinching/rubbing motion to better stimulate myself. I found it easier to turn the ears vertically and just rub my clit instead of horizontally where I would place my clit totally in between. I found the vertical circular motions to be really pleasurable. It is the kind of stimulation that makes your squirm, or hits you with that sudden jolt of pleasure. As for the varying pattern feature between the ears, I did not take as much not of it as I suspected. As I mentioned though, patterns are not typically my thing and I was not able to get the ideal placement around my clit as I would have like. When one places their finger in between the ears or even their nipple you can definitely notice the exchange. I do think if the ears had more flexibility to be opened or closed it would be much better, but with time I am sure Screaming O will revamp or make something to that affect.

I would say if you are a power queen like myself you may be better off with something like the Femme Funn Ultra Bullet, however if you are a little more sensitive and really enjoy pattern stimulation this is something you will likely enjoy. I have been using it pretty regularly for teasing and when I have a long span of time. I really appreciate Peepshow Toys for allowing me this opportunity of exploration, fun, and pleasure all in exchange for my honest thoughts and feelings. You can find Screaming O Toone on their website for a reasonable $45.00, but as I said I really suggest taking a partner so check out the Avant family, or even the Avant Pride P2. Do whatever you would like though, always read reviews with a grain of salt and your pleasure in mind! 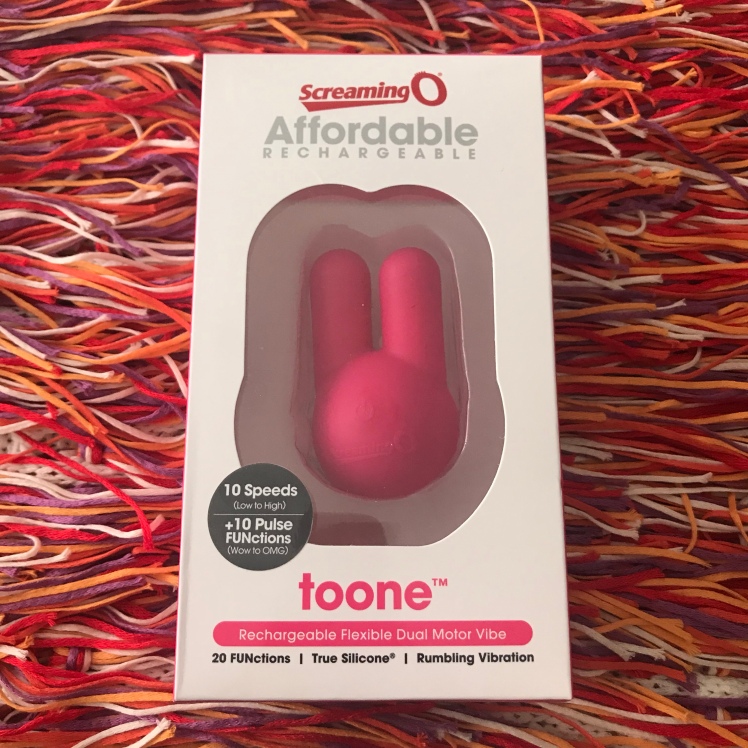